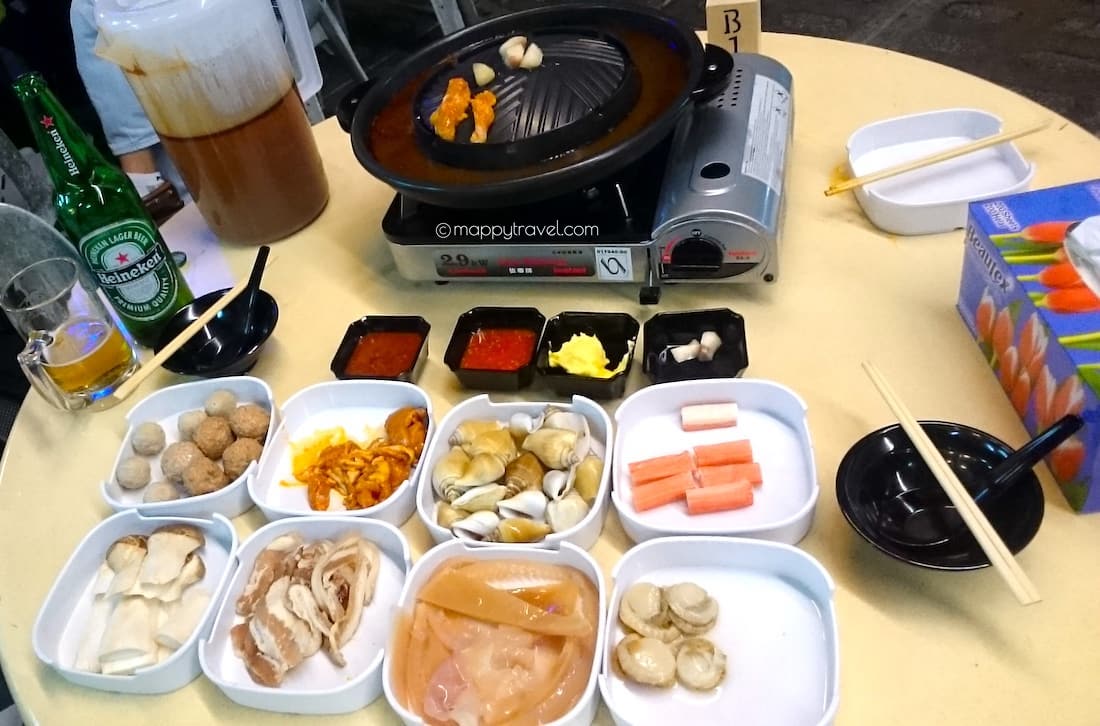 The Dee Mak Mookata dinner that we had at Geylang was unplanned. It was raining on that day. My boyfriend took shelter in the coffeeshop at Yin Chuan Building while waiting for me to arrive after work on a weekday. We chanced upon Dee Mak Mookata stall and decided to take our dinner there as it was an auth Thai BBQ and steamboat. Having steamboat was probably the wisest decision to eat on a cold rainy day leisurely. 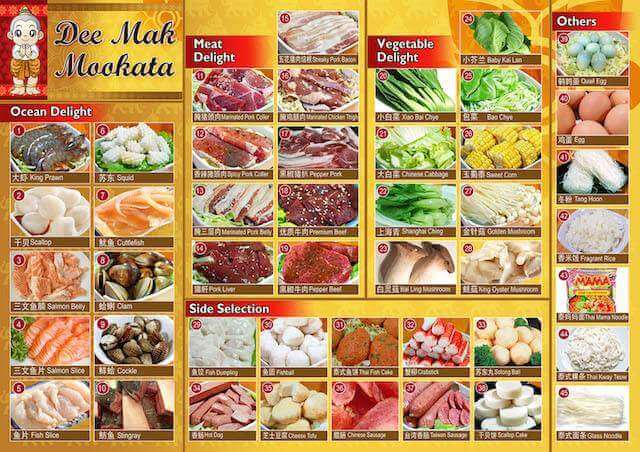 The Dee Mak Mookata menu was really impressive. I was bowled over by the choice of food that I saw. 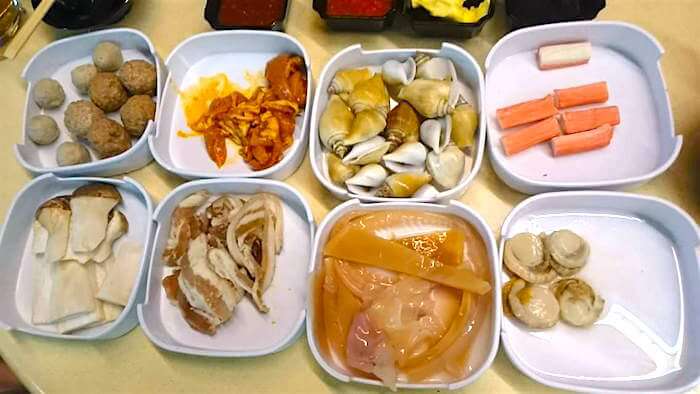 We selected nine dishes for two people. There were two types of meatballs on the plate at the top left-hand image which we placed together to take a photo – pork meatballs and cheeseballs. 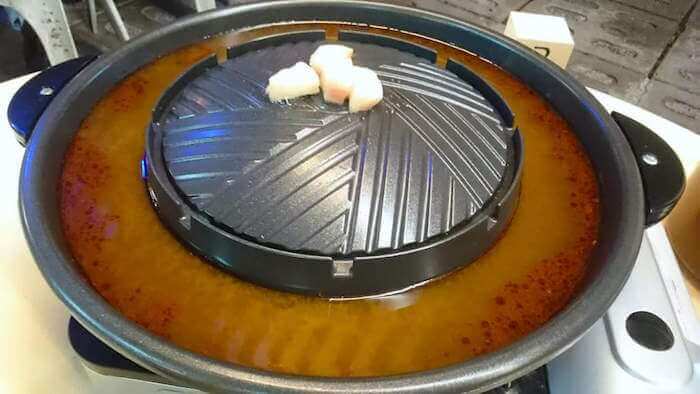 There were two choices of soup base – spicy and non-spicy. We chose the spicy soup base for the steamboat, which was a Tom Yum flavour concocted by Dee Mak Mookata. In other words, we would not get the original Tom Yum taste familiar to us. The other choice of non-spicy soup was corn soup.

I was surprised to know that Dee Mak Mookata steamboat pot was extremely shallow as compared to the typical one which had a deeper base. I was somewhat paranoid and doubtful whether the food that was half-submerged in the soup would cook properly. Ricky, who was the Manager at Geylang Branch, clarified my doubts. 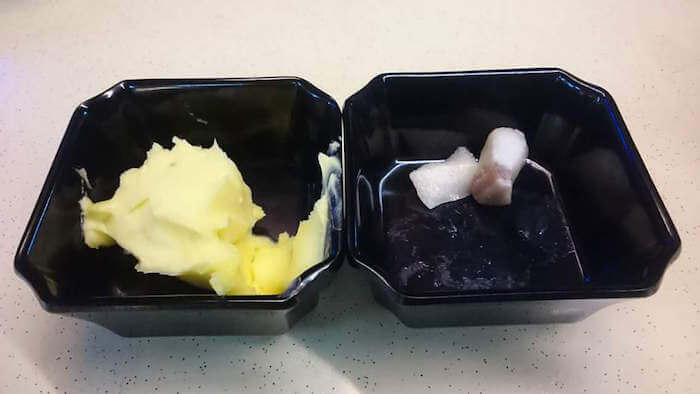 For the BBQ base, I was given butter and lard (also known as pork fat). Ricky explained that the fat had to be placed on the BBQ base first for it to melt slowly and afterwards, it would glaze the surface. Subsequently, smear the butter and lastly, add the food on it. This method would enhance the taste when more flavours were gradually released.

On the left-hand side of the photo above, there was a jug of soup on standby. It was used to pour into the steamboat anytime when the soup was lesser. Thumbs up to the box of tissues provided by them for the extra service. 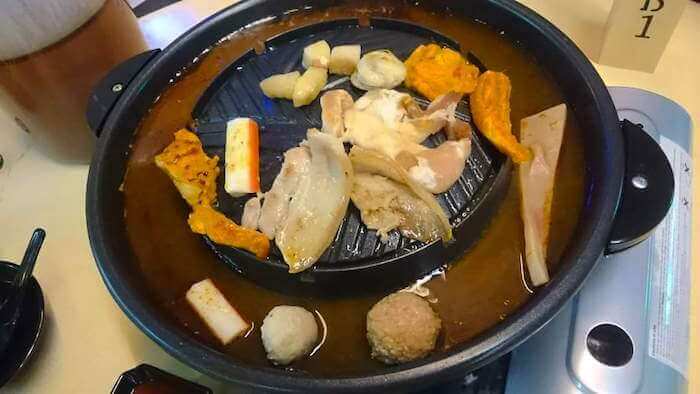 All the food was very fresh. There were already several reviews online raving about this factor. Dee Mak Mookata certainly lived up to their reputation, which I could attest. My favourite food was their spicy chicken marinated with Tom Yum sauce and their yummy cheese balls! I would highly recommend anyone to try out these two food.

You could taste the fragrant Tom Yum sauce from the chicken as it was full flavoured. Anyone who worships cheese like me would be delighted to have it oozing out from the cheeseballs when you chew them inside your mouth. I love them very much!!

I was lucky to get two packs of complimentary instant noodles from Ricky to try. He said they would be very delicious to go with the soup. He was right. The slow cooking of the noodles in the shallow soup base somehow retained the crispiness of the noodles and did not soften them quickly. You had to be patient to enjoy the crunchy noodles.

As there were not many customers on the day that we went since it was raining, Ricky demonstrated his friendliness and excellent customer service by helping us to barbeque the meat for quite some time while all of us chatted. This restaurant was the second outlet that they had opened recently on 4 July 2015. The first outlet was in Jurong West and tended by another partner, Michael. 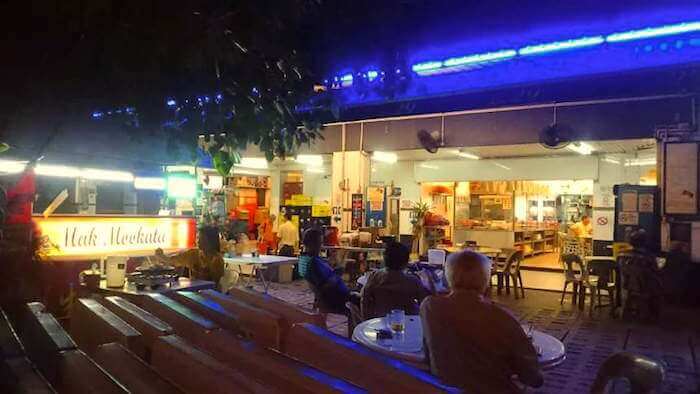 He also stated that there would be more local dishes coming up, such as Zi-Char (wok-fried dishes) or fried rice to accustom to the taste of the regular elderly customers in the coffee shop. They were more reluctant to try out “non-local” cuisine that proved to be more adventurous for them. As expected, customers who patronised Dee Mak Mookata were mostly young people.

I was pleased with the quality of the food. For the order that you see above, the average cost for one person was S$15.00. I would recommend others to go for a try at such a reasonable price. It was a very relaxed place to hang out in the coffee shop and not too noisy for me, probably because it was raining. 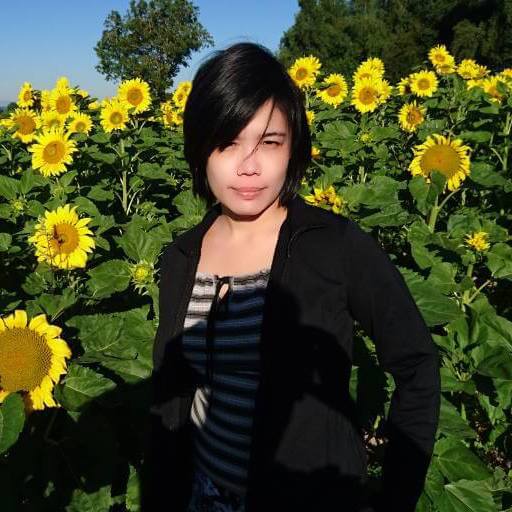 Hi, I'm MissSJ, your virtual travel guide here. Travelling, Google Maps and YOU are my interests. I enjoy amplifying my stories and tips with online maps to calculate the distance figuratively and navigate the direction so several points of interests are conglomerated in the same area as possible. With a virtual assistant, take my ride and join me!

How to Go to Pulau Tioman Island from Singapore to Mersing

7 Cambodia Travel Tips: Things to Know Before Travelling to Cambodia

Getting from Siem Reap Airport to City and Angkor Wat: Taxi, Tuk Tuk and Motorbike